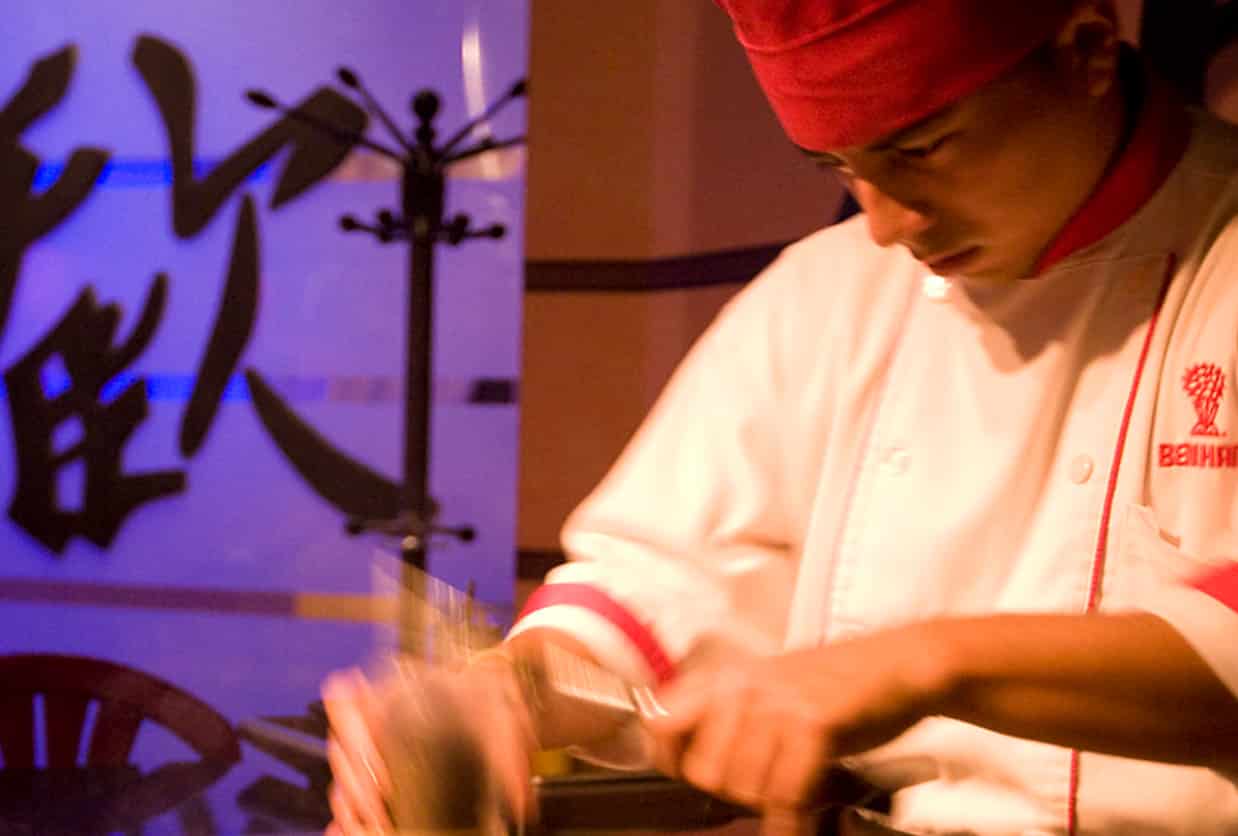 In Cupertino, California, Benihana sits high atop a hill in Vallco Fashion Mall, and is the original teppanyaki steakhouse and still Cupertino’s most popular choice for succulent steaks, juicy chicken and savory seafood. Benihana is open daily for lunch and dinner, featuring Happy Hour each Monday through Friday from 4-7 p.m.

THE HISTORY OF BENIHANA

Benihana begins with the descendent of a samurai warrior and a small Tokyo coffee shop. Just after the war, Yunosuke Aoki (a samurai descendent and popular entertainer) decided to start a coffee shop with his wife, Katsu. Wanting to offer something different than other coffee shops in the area, Yunosuke Aoki rode his bike over 20 miles to purchase real sugar to serve in his shop.

This flair for doing something different caught the eye of his son, Hiroaki. As did the shop’s name: Benihana. After college, Hiroaki (or Rocky, as he would become known) moved to the U.S. to pursue his dream of opening his own restaurant. One that combined his father’s flair for doing something different with food that was truly memorable. But with little money to his name, Rocky’s path was not an easy one.

He started by selling ice cream on the streets of Harlem while studying restaurant management at night. The ice cream business turned out to be very profitable, thanks in part to the colorful Japanese cocktail umbrellas he added to the treats, and he managed to save up $10,000 for his first Benihana restaurant.

With his seed money in place, Rocky took out a loan and used it to start America’s first Japanese teppanyaki restaurant on West 56th street. Named after his parents’ Tokyo coffee shop, Benihana opened in 1964, featuring an authentic Japanese farmhouse interior and food prepared on steel teppanyaki grills right in front of customers. His highly trained teppanyaki chefs delighted customers with intricate knife work and theatrics. Not to mention delicious food. But it wasn’t until legendary food critic Clementine Paddleford gave Benihana a rave review that the restaurant really took off, paying for itself in just six months.

Soon after, Rocky opened a second Benihana location in New York and a third Benihana restaurant in Chicago. By 1972, there were six Benihana locations in the United States, with more opening every day. Sadly, Rocky Aoki died in 2008 at the age of 69.

That restaurant soon became famous for its theatrical chefs, teppanyaki grills and traditional Japanese architecture. The interior structure of the restaurant was a 150-year-old Japanese barn that Rocky’s father found in the countryside of Japan.

Today, Benihana is the leading Japanese-inspired restaurant chain in the United States. The Benihana restaurants are a place to meet new friends, celebrate special occasions or just enjoy an entertaining meal. Their highly skilled teppanyaki chefs slice and dice your meal on teppanyaki grills, providing entertainment as you enjoy traditional Japanese cooking using American favorites like steak, chicken, seafood and vegetables. Benihana restaurants pioneered the communal dining concept in the early 1960’s where up to eight people are seated around a Japanese hibachi grill waiting anxiously for their personal show to begin.

Currently there are 77 Benihana restaurants in the United States, Caribbean, and Central and South America, their success continues to be a result of their relationships with their guests, investors and employees.

THE HISTORY OF TEPPANYAKI

What does Teppanyaki mean? It means, quite literally, broiled on a steel grill, which is the definition of Japanese teppanyaki-style cooking in its most simple form. However exactly when teppanyaki-style first came into use is a bit more complicated.

Some believe the tradition began over 200 years ago when families would prepare food together on small hibachi grills. Others believe it began in the early 1900’s with teppanyaki chefs introducing the style, along with their intricate knife skills, to diners.

Regardless of which story is true, teppanyaki has evolved greatly over the last hundred years, moving from food that was simply “broiled on a steel grill” to something of an art form, an art form Benihana restaurants first introduced to America in 1964.

A large part of the success of the Benihana concept can be attributed to the performance that awaits the millions of guests each year. Benihana gives supports their guest and community with their sponsorship and litter removal to help keep the roads safe. We are pleased to have Benihana join the Adopt A Highway® program with their new sponsorship!