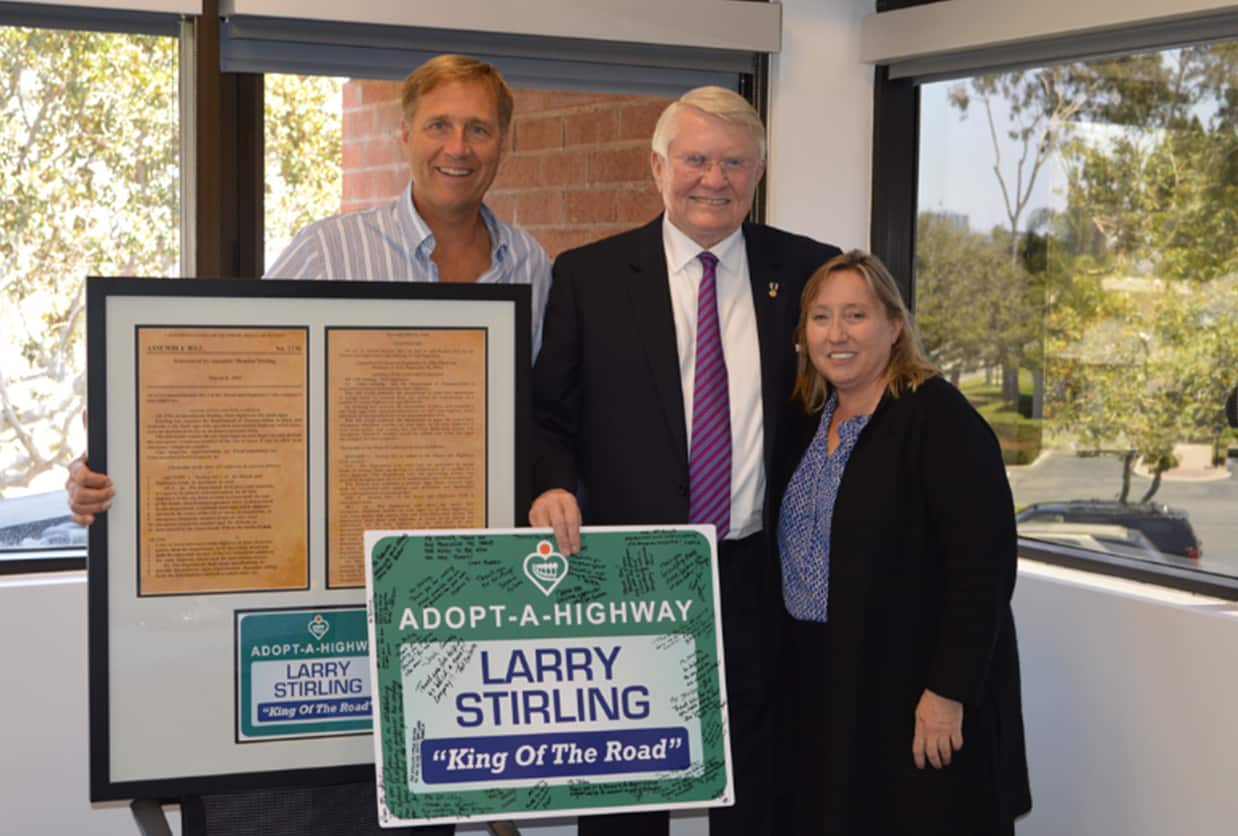 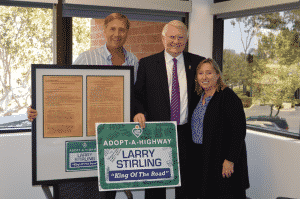 On June 16, AHMC was honored to hold a luncheon for a very special guest, without whom Adopt A Highway® would most likely not have come to exist.

Back in the day, before Adopt A Highway Maintenance Corporation® had become an idea, a discussion, and a vision between our company’s owners  Peter, Dan and Dennis, there was undoubtedly a need to find the political support within Sacramento to move the concept of corporate sponsorships forward. On that road (no pun intended), AHMC was fortunate to meet Senator Larry Stirling.

In 1968, Upon release from active military duty, Larry took a job as an administrative analyst for the city manager of the City of San Diego. Four years later he was selected as the finance director for the San Diego Association of Governments (SANDAG). Four years later, with the help and guidance of Lee Hubbard and Pete Wilson, Larry was elected to the San Diego City Council. In 1980 he was elected to the State Assembly and served four terms. In 1988, he was elected to the State Senate where he served until appointed to the Municipal Court bench by Governor George Deukmejian. Upon unification of the state’s trial courts, Larry was elevated to Superior Court judge where he served until 2003, when he retired.

As an elected official, Mr. Stirling understood the needs of the State relative to underfunded maintenance in getting California’s highways clean. Out of that need, Senator Stirling championed the Adopt A Highway® concept and successfully worked to co-sponsor the bill that would allow AHMC to begin our California efforts and build a program that now has a national footprint. If it weren’t for his vision and hard work,  the corporate sponsorship concept would not be as successful as it is today.

The Adopt A Highway® / Sponsor A Highway® Programs began with a vision by Mr. Stirling and after years of dedication flourished into a huge succcess. 25 years later, it is our great privilege and pleasure to thank and acknowledge Larry for all his efforts to encourage innovate solutions to the litter problem in CA and be the reason we have been able to get our work started. All these years later he remains a champion for this program, as well as a friend and advocate of public-private partnerships.

We sincerely thank Mr. Stirling for fathering the Adopt A Highway® concept and for his unyielding support of our efforts over all these years.

To us, he will always be “King of the Road”. 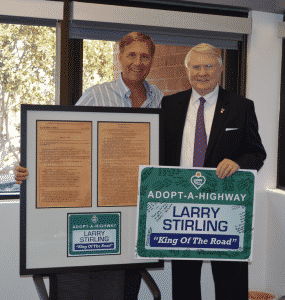 Peter Morin presents Senator Larry Stirling with a framed copy of the original Bill he authored that helped launch the Adopt A Highway ® program.